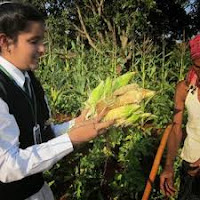 Lalita Prasida Sripada Srisai
She uses corn cobs in her project. Her project, 'Low Cost Bio- Absorbent' aims to clean waste water by flowing through different layers of Corn cobs which is a cost-effective and simple technique of cleaning water.
Corn cobs, she says, are useful for immobilizing the contaminants in domestic and industrial effluents, and in ponds, reservoirs and water tanks as well.

He uses an innovative, hands-on approach to solve some of the greatest engineering challenges.  His project titled 'Vaxxwagon: An Innovative eco-friendly No Ice, No electric, active refrigeration system for last-leg vaccine transportation' is about vaccine transportation to remote locations that requires both ice-packs and electricity which is a major problem in developing countries. 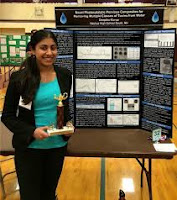 Deepika Kurup
Her project was focused on to find solution for the world's clean water problem. According to the World Health Organization, one-ninth of the global population lacks access to clean water, and 500,000 children die every year because of water related diseases
Kurup project titled, "Novel photocatalytic previous composites for removing multiple classes of toxins from water," shows that the photocatalytic water purification technology developed in her research is safe and environmentally-friendly, as it does not produce any toxic byproducts. The purification process uses only solar energy, so it's cost effective.

who as part of a scientific competition has developed a test with which not only can detect early signs of disease, but also to stop them. Is this an invention or will it become a breakthrough discovery?
Krtin has developed a potential test for Alzheimer’s which could allow the disease to be diagnosed 10 years before the first symptoms appear and even stop its progression.Krtin has developed a ‘trojan horse’ antibody which can penetrate the brain and attach to neurotoxic proteins which are present in the first stages of the disease.