is one of the finest Business person in India who inherited company from Legendary Dhirubhai Ambani and took it to new heights.

Dilip Shanghvi
Founder of Sun Pharmaceutical Industries, Most Valuable Indian Drug Company. He is self made Billionaire and now top in Rich List in India.

Founder of Wipro Technologies, one of the largest IT company in India. Inherited an Edible Oil company from his father with the same name Wipro and turned it into third largest Outsource Company in India.

Hinduja Brothers
90 Year Old company run by 4 brothers together. Some of the big names in Hinduja Group are Ashok Leland, IndusInd Bank, Gulf oil Corporation Ltd, Hinduja Tech Limited. Company has its presence in many countries and almost everywhere they are profitable.

Shiv Nadar
is co-founder of HCL group, a comp
uter software and hardware based company in India. It’s flagship outfit HCL Technolgy is rising to a new high with shares soaring which helped him increase his net worth. He is another Self Made Indian Billionaire. 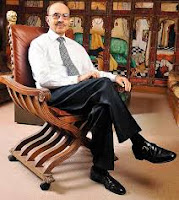 Godrej Family
old Consumer Goods Conglomerate, runs by Godrej Family. Company is one of the most trusted brands in India. 9 member of the family are busy in running company which is chaired by Adi Godrej.

Lakshmi Mittal
Another Billionaire whose net worth has declined significantly in last few years. He is still one of the richest person in India with net worth more than 12 Billion

Kumar Birla
Since he took the charge of Birla group, company rose to new high.
Posted by Dhirendra Negi at 12:58