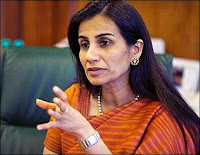 
Fortune has hailed Kochhar for building ICICI Bank into ‘India’s largest and most profitable private sector lender’ Chanda Kochhar has been ranked as the most powerful woman in the Asia Pacific region by fortune magazine.

Arundhati Bhattacharya SBI chairperson is ranked second in the list. She has the distinction of being the first woman to head the 209-year-old state Bank of India.

Nishi Vasudeva is the first lady to head an Indian oil company, and is ranked fifth in the list.She was instrumental in turning around the fortune of Hindustan Petroleum Corporation.

Shikha Sharma, Axis Bank's managing director and chief executive is ranked ninth in the list. Appreciating Sharma’s efforts, Fortune said, ‘Her steady hand helped Axis’ profit increase 18.3 per cent, to around $1.1 billion, in the year ending in March.
Posted by Dhirendra Negi at 01:14